Like most people of a certain age, handwriting was a major focus of my early childhood education. It was not, to say the least, one of my strengths.  My teachers were persistent, reminding me on an almost daily basis, that practice makes perfect. If I kept at it – if I practiced more – my handwriting would continually improve.

As it turned out, this may have been the example that proved the rule (I am, still, barely able to sign my name). But the concept of practice was ubiquitous when I grew up. I recited my spelling words out loud, letter by letter, completed multiplication worksheets until my fingers (and mind) ached and recited, repeatedly, the state capitals. I also went to baseball practice, practiced my trumpet (perhaps another bad example) and attended play rehearsal. While many of these activities continue to occupy the time of our youth, the most compelling contemporary example may be gaming, on which our children (and some of our friends, I expect) spend countless hours perfecting their techniques and increasing their point totals.

Certainly, throughout elementary and high school, and even in college, there was an expectation that we would practice frequently, an explicit understanding that our skills will improve as a direct result, and feelings of guilt, inadequacy and remorse if we weren’t able to find the time to practice or, as in my earlier examples, practice didn’t yield the expected results. It was just how things were. And we accepted it.

This steadfast belief in practice wasn’t created by psychologists or learning theorists, such as Skinner, Gagne’, Piaget or Maslow and wasn’t the result of the rigorous scientific research they and others conducted. At best, they simply confirmed something that we have known since the middle 1500’s, when the phrase ‘use makes perfect’ was first used – the more we do something the better at it we get, especially when there is an expert around to give us guidance and feedback.

In the work place, things are a little different. Our ability to practice is, at the very best, limited, and subject to the good will of our managers and the kindness of colleagues, coaches and mentors. For technical skills, training continues to offer safe opportunities to practice and learn. That used to be the case for skills that involve human interaction – so called ‘soft skills.’  Multi-day training programs, during which we had the opportunity to practice new skills, were commonplace. Now they are less so.

Today, classroom programs are shorter, if they are available at all and, and they are heavy on content and light on practice. A substantial amount of corporate training is delivered over the web. And while web-based programs can be incredibly creative and engaging, skill practice predominantly involves demonstrating that we know what to do or say in specific situations or that we recognize the right behavior when we see it demonstrated by others.  They rarely, if ever, include activities that require us to demonstrate that we can actually do something. And for work tasks that require us to engage with others, that kind of practice is absolutely critical.

The good news is that there is a solution. There are several trends that make possible the addition of the missing link in web-based training – meaningful practice for skills that, simply put, require us to speak to and engage with others.  To be specific, there now is:

As a result, technology platforms exist that allows us to learn new interactive skills through traditional eLearning and then practice applying those skills in a way that fully replicates what used to happen in the classroom. One such system is Rehearsal (www.rehearsal.com). Imagine the following:

And because the entire experience is virtual, learners and coaches are bound by neither location nor time.

Since the early 1980’s eLearning designers have struggled with their inability to fully recreate the classroom experience through technology. By providing web-based video practice and feedback, Rehearsal has, finally, solved this problem and done so in a way that is efficient, effective, repeatable and enjoyable – words that any L&D professional or business leader loves (and longs) to hear. 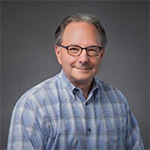 Larry Israelite was born and raised on a small chicken farm in Upper Black Eddy, PA. Since moving to the big city, he has spent more than 35 years trying to answer two simple questions: how can we do better business thorough learning and how can we enable better learning through technology. Larry has worked in a variety of industries in senior learning and talent management roles, most recently serving as the vice president of learning and development at the Liberty Mutual Group and the head of assessment development at Smarterer and Pluralsight. He has edited three books, including Lies About Learning and More Lies About learning, the last of which was published in 2015 by ATD Press. Always wanting to be on the bleeding edge, Larry completed his coursework for PhD in Educational Technology a scant three months before the release of the first IBM PC. His degree was awarded two year later.